Update: Teenager admits impregnating 10-year-old girl in Benue; Police reveal her uncle was making arrangements to marry her out to a blind man 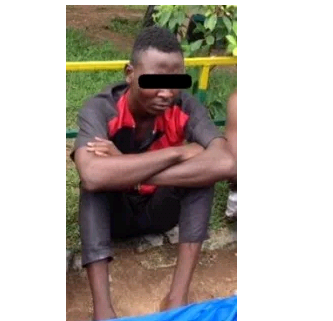 A teenager on Thursday admitted to have impregnated the 10-year-old girl who delivered a baby girl few days ago in Makurdi in Benue State.

The teenager who was paraded by the State Commissioner of Police, Mukaddas Garba, for alleged rape of the minor. The victim was living with her uncle at the North bank area of Makurdi at the time of the incident before she was dumped at an Internally Displaced Persons camp in Benue.

Garba had put the age of the teenager at 18 but in an interview with newsmen, the suspect said he was 17 and an SS2 dropout.
“I accept responsibility for the pregnancy,” he said.

The teenager explained that sometime last year, around December, he had helped the girl severally after she cried to him that there was no food for her to eat.

He confessed he had sex with her one of the nights she told him that the uncle drove her away and he had to provide a space in his room for her to sleep.

He admitted that he had carnal knowledge of the 10-year-old twice and never knew she was pregnant because nobody ever brought the matter to his knowledge.
He said the girl kept a distance from him and that even when he sighted her in February, this year, she ran away from him so he never knew there were any such development.

The teenager who said he is an orphan but now works in a relative’s farm to earn a living, emphasised that he was shocked when on Monday, a friend came to him at his house in North bank area of Makurdi and stated that the girl just gave birth and mentioned his name as the father of the baby.
“It was that person who persuaded me to follow him to the hospital and see the girl and my baby. I agreed to follow him and on reaching the hospital I was arrested,” he narrated.

Meanwhile, the commissioner of police, alleged that the teenager who hails from Gwer West area of the state raped the 10-year-old, adding that he would soon be charged to court.
“Investigation reveals that the girl’s uncle was making arrangements to marry her out to an old blind man when he discovered that she was pregnant. The uncle is currently at large,” CP Garba added.
at August 09, 2019
Email ThisBlogThis!Share to TwitterShare to FacebookShare to Pinterest
Labels: Crime