For everything that has an advantage, there are equally disadvantages. The same also applies when it comes to dating beautiful women. Some the advantages however includes 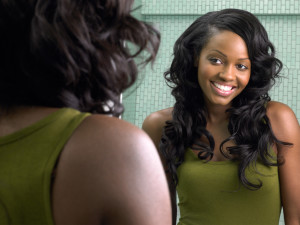 1.Confidence Enhancing: A beautiful women is always a prized catch. More so, if there were other guys vying for her attention and you came out with flying colors. Hence, the confidence enhancement to overcome greater challenges in life.
2.Career Booster: All beautiful women are not always after your looks. Stability in your career is something they look out for before they commit. This is something not unknown to the guys. Hence, the inspiration to perform and the booster dose to their career.
3.Stable Relationship: A couple with the female more attractive than the male have been found to have longer and more stable relationships. This no doubt, is an important benefit of dating beautiful women, if you are looking to settle down soon. : You may not be getting married right away. You may also not be finally successful with the first few women. Dating a beautiful women earlier on however, makes you attractive e other ladies. 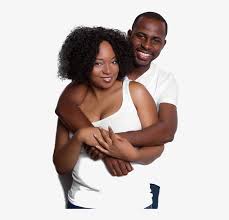 4.Makes You More Attractive To Other Women

5.Beauty Without Makeup And Least Efforts: If your women is naturally beautiful, she will remain so without trying too hard. And yes, she will still be attractive in bed the next morning.
6.Boosts Your Immunity: If your women is beautiful, it goes without saying that you will have a healthy sex life. This in turn is sure to boost your immunity and will help in leading a healthy life. That is it, hope you enjoyed this if yes, hit share button.

The National Youths Service Corps (NYSC) has announced that the 2019 Batch B registration will now run from Saturday 1st June to Wednesday 12th June 2019. This was revealed in a tweet from the NYSC official handle that read:

The Economic and Financial Crimes Commission is set to present nine witnesses in its case against musician Azeez Fashola, aka Naira Marley, The PUNCH can report.

According to court documents obtained by our correspondent, the witnesses would give evidence of their investigation, tender exhibits and reveal their findings to the court.

Three of the witnesses were said to have taken the defendant’s and witnesses’ statements.

The remaining are representatives of Mastercard, Visa Inc and Guaranty Trust Bank, who are expected to tender relevant card and account details of the defendant to the court.

The artiste was arrested on May 10 at 9 Gbangbala Street, Ikate, Lekki, Lagos, together with Omomniyi Temidayo (aka Zlatan Ibile) and three others for alleged advance fee fraud.

After his arrest, the anti-graft agency filed 11 charges against Naira Marley bordering on alleged cybercrime and identity theft.


The alleged crimes were in contravention of the Money Laundering (Prohibition) Act and the Cyber Crimes Act, which the artiste risks seven years in jail if found guilty.

Section 33 (2) of the Act, which Naira Marley was accused of contravening reads, “Any person who uses: a counterfeit access device; an unauthorised access device; an access device issued to another person; resulting in a loss or gain commits an offence and shall be liable on conviction to imprisonment for a term of not more than seven years or a fine of not more than N5,000,000.00 and forfeiture of the advantage or value derived from his act.”


The charges with suit number FHC/L/178C/19 were filed before a Lagos State High Court. Veteran Nollywood actress, Shan George has called out Ned Nwoko, Regina Daniels’ husband, over his recent marriage to the budding actress in a post & delete on social media. She wrote:“Senator Ned Nwoko is an ugly sad little prick, with all his so called billions, aside sleeping wit some greedy actresses and buying them cars, or marrying little children all over the place, who him epp? Is there a free well equipped children’s hospital in his own village built by him? Or a free primary/secondary school for all children of his village? Or free care home for d aged widows in his village? I mean only in his village, at least he can afford it. I’ve never seen an adult so disgusting and shameless. Wicked enough to put a lil child like Regina in a traditional cult of ‘don’t ever cheat on me’. His place in hell will sure be d hottest. (Well, this is just my opinion) Shan George.”See more: https://gistmore.com/you-are-disgusting-and-shameless-actress-shan-george-blasts-ned-nwoko
at May 31, 2019 No comments: Links to this post
Email ThisBlogThis!Share to TwitterShare to FacebookShare to Pinterest

Teen Star Regina Daniels Shut Critics Questioning Her Happiness With Wedding Band Around The Corner. The 18year old Nollywood actress, beaming with pride while flaunting her engagement ring at her Children's day party held yesterday. The budding actress has been heavily criticised by her fans and biological father Barrister Ojeogwo who has been against her marriage to his childhood friend Ned Nwoko. Billionaire Ned Nwoko who has now officially married the actress according to traditional rites. She shared the footage to confirm her new marital and financial status to shut all her critics. Watch The Video Here..https://www.thenaijafame.com.ng/2019/05/actress-regina-daniels-nwoko-flaunts.html?m=1
at May 29, 2019 No comments: Links to this post
Email ThisBlogThis!Share to TwitterShare to FacebookShare to Pinterest

Tiwa Savage stormed Delta State with her son, Jamil as she performed at Regina Daniels’ Children’s Day carnival.
People were struggling to snap pictures with Tiwa Savage.
A lady fainted while she was Struggling to take a picture with Tiwa Savage at Regina Daniels Children’s day carnival in Delta state.
Someone was heard in the video screaming “People are fainting!!!!”
Watch the video below.
at May 28, 2019 No comments: Links to this post
Email ThisBlogThis!Share to TwitterShare to FacebookShare to Pinterest

What are some tips for having a great relationship?

In This Section
Connecting with someone romantically, emotionally, and physically can be really amazing. But there's a lot of work that goes into building a good relationship.

What are some tips for having a great relationship?

News reaching us has it that a new vice chancellor has been appointed today, May 23rd 2019 for the University of Nigeria Nsukka (UNN). He is Professor Charles Igwe. Prof Igwe hails from Awka, Anambra State.ProfileCharles Arizechukwu Igwe, a Professor of Soil Science was born at Awka, Anambra State, Nigeria on August 23, 1958. He holds a PhD, M.Sc. and B Agric degrees in Soil Science from University of Nigeria, Nsukka. He also obtained Postgraduate Diploma in Soil Science from Agricultural University, Norway, Ås. He was Head of Department; Associate Dean of Faculty; Dean of Faculty and Directors of Centres at various times. Charles was Visiting Researcher/Professor in Universities located in Germany, Japan, Norway, Italy and France. He is a member, University Governing Council and has supervised Undergraduates, Masters and many PhD students in his discipline. He is an External Examiner and Professorial Assessor in many Nigerian and European Universities.Professor Igwe's research focuses on the contributions of organic and mineral colloids in stability of tropical soils. He contributed significantly in the knowledge of stability of unstable tropical soils which undergo catastrophic soil erosion with intensive tropical rainfall. In the face of Global Climate Change, he expanded the scope of his research to include the “Carbon sequestration in tropical soils”. In his search to unravel inherent soil factors influencing erodibility (K) factor of erosion models, he published some pioneering works on soil colloidal-dispersion. He is author/co-author of many peer-reviewed articles in reputable Journals of Soil/Environmental Sciences. He is a NORAD Fellow; Fellow of Alexander von Humboldt (AvH) Germany; Regular Associate, International Centre for Theoretical Physics, Trieste, Italy; Fellow, Japanese Society for Promotion of Science; Winner, University of Nigeria Vice-Chancellor's Faculty and University Prizes 1992/93; Listed in Marquis Who’s Who in Science and Engineering; participant in German DAAD/DIES Deans Course 2009. Charles attracted scientific equipment donations to the University from AvH in 2001 and 2010 He is a two times recipient of Research Grant from Third World Academy of Sciences (TWAS). Professor Igwe is married with 4 children.Professor Igwe, until his appointment was the Deputy Vice-chancellor, Administration, University of Nigeria Nsukka. He will take over from the outgoing vice chancellor, Professor Benjamin Ozumba.Professor Igwe is expected to assume duty on June 14, 2019.
at May 24, 2019 No comments: Links to this post
Email ThisBlogThis!Share to TwitterShare to FacebookShare to Pinterest

Adewale Adeleke Kisses Girlfriend As She Graduates From Georgetown University

Davido's elder brother, Adewale Adeleke celebrated the love of his life who just bagged a M.S degree in Physiology and Biophysics from Georgetown University today.

Sharing photos from the graduation, he wrote 'congrats to the love of my life. So proud of you baby, I know how much time and effort you put into this degree. So blessed to have a smart, intelligent, beautiful woman in my life! This is only the beginning for us'. 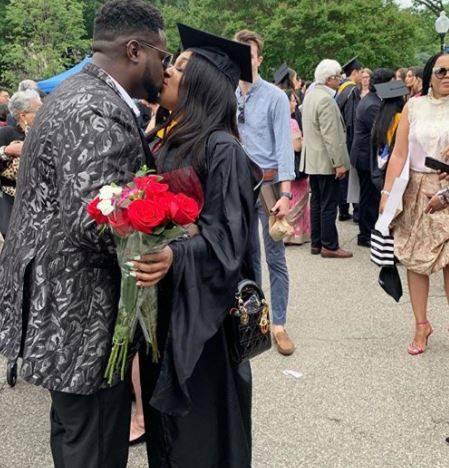 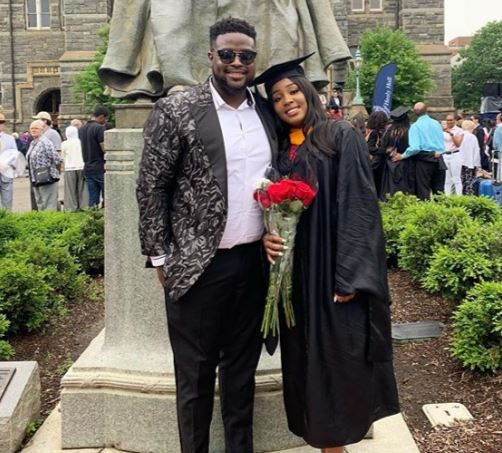 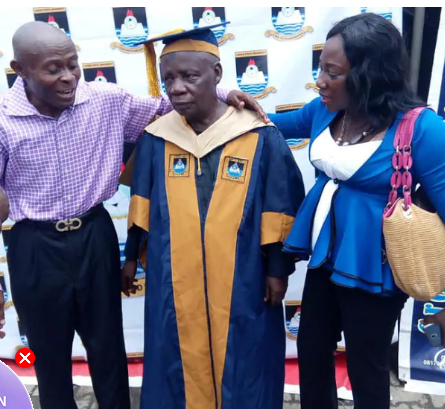