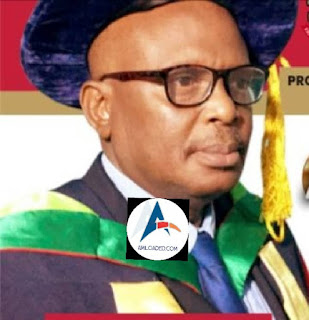 Among the eleven candidates that applied and contested for the post of the Vice Chancellor of Ladoke Akintola University of Technology LAUTECH Ogbomoso, Amiloaded.com can authoritatively report that Professor Michael Olufisayo Ologunde has emerged as the substantive replacement for the outgoing Vice Chancellor, Prof. Adeniyi Suleiman Gbadegesin whose tenure expires in February 2019.
Prof. Ologunde, a native of Ajagunlase in Ola Oluwa local government of Osun State, a professor of Food Chemistry and a former head of department of food science and engineering defeated ten other notable professors; six from within LAUTECH community and four from other universities, among which are Prof. Timothy Adebayo (Agronomy department), Prof. Idowu Adetunji (Agronomy department), Prof. Ismail Oladosu (Agricultural Economics & Extension), Prof. Femi Fadiora (Anatomy) and one Prof. Joseph Abayomi.
The process that led to the emergence of Ologunde was through a painstaking selection mechanism that involves declaration of intention, collection of form, submission of Curriculum Vitae and proposed vision for the university, Computer Based Test and oral interview which was conducted within the premises of the University of Ibadan to avoid undue interference by various  pressure groups, among the panel selected to conduct the interview were members of the governing council professors and academic administrators from within and neighboring universities, ASUU, NASU, SSANU, Alumni Association. In all, Ologunde emerged overall best in all the stages, coming distant second was Adebayo, and Adetunji who came third from documents and papers sighted by Amiloaded.com
Going by the joint ownership of the institution by both Oyo and Osun States, the post of the VC is rotational. Gbadegesin, a Professor of Urban and Regional planning is a native of Oyo town in Oyo state is rounding up his tenure as the representative of Oyo while Ologunde will fill the Osun gap for the next five years. While Governor Abiola Ajimobi will now act as the visitor to the university.
According to tradition, the governing council of LAUTECH forwarded the names of the best three candidates for both governors for approval, Amiloaded.com confirmed from a reliable source close to the seat of government in Oyo State that Senator Abiola Ajimobi has signed approval the name of Micheal Ologunde which was equally forwarded to Mr. Gboyega Oyetola who has equally counter signed the document with a directive for immediate announcement of the newly elected VC by the university management.
Amiloaded.com reliably gathered that this will be first time in the history of the 28year old institution whereby an home grown Professor, somebody who works within the LAUTECH community will be selected and appointed as the helmsman of the citadel of learning. Professors Olusegun Oke, Late Akinola Salau, Benjamin Adeleke, Moshood Nasir and Suleiman Gbadegesin were all external administrators that have managed as sole administrators or vice chancellors.
at December 08, 2018
Email ThisBlogThis!Share to TwitterShare to FacebookShare to Pinterest
Labels: Universit Gist